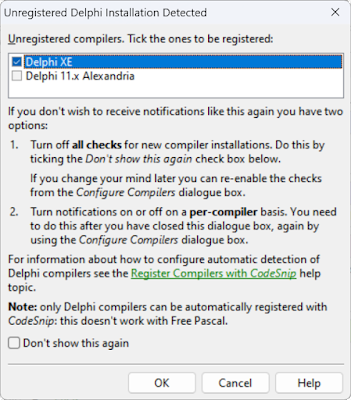 To close off the year, here's a new release of CodeSnip  that adds a couple of new features that have been in the pipeline for quite a while. The first is one I've been working on ever since a user missed out on getting Delphi 11.x Alexandria support when I added it. He expected CodeSnip to just use it when test compiling snippets. It didn't do that. I think his expectation was valid, so I decided to make CodeSnip a bit cleverer! Until now, when support for a new Delphi version was added to CodeSnip you would have to remember to tell it you wanted to use the new compiler, if you had it installed. Now, when CodeSnip starts it checks if there are any versions of Delphi on your system that are not registered with CodeSnip for use when test compiling snippets. If it finds any it offers to register them for you. This feature only works for any version of Delphi that CodeSnip knows about, which for the moment is all of them from Delphi 2 to Delphi 11.x Alexandria. This doesn'
Post a Comment
Read more 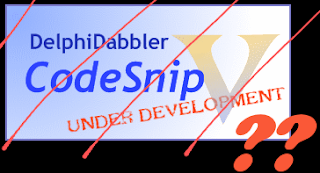 Over 9 years I've had three attempts at creating CodeSnip 5. All have been very ambitious. The latest was CodeSnip Belvedere, rashly announced on new year's day this year. Now I never normally make new year's resolutions, and I should have stuck with that tradition! Of course Belvedere foundered - it was way too ambitious. Again. I was overwhelmed right from the start. Just look at the repo where there have been bugger all commits . So here's a new announcement I can stick by: Belvedere is dead, abandoned, gone. The idea to rebuild CodeSnip from the ground up was an attractive proposition, but it was way too much work. Right from the start I seemed to have an inkling I might have bitten off more than I could chew, because I even queried the wisdom of the new year's resolution in the announcement itself ! And that's what all the failed attempts to create the next release have in common: the plans for the new version were always too ambitious . Maybe I've le
Post a Comment
Read more

- November 04, 2022
Just released  CodeSnip  4.20.2 which is a bug fix update to CodeSnip 4.20.1. It fixes a bug in the main menu of the UI. To replicate the bug: Drop down a main menu item. Select an item on the dropped down menu using the cursor keys. Do not press enter. Press F1. This raises an exception in CodeSnip prior to v4.20.2 This release also update Windows OS Version detection to correctly detect Version 22H2 of both Windows 10 & 11. Because of the bug fix, I do suggest updating. As usual you can download the program from  GitHub  or from SourceForge: Download Standard Edition   Download Portable Edition Source is available to download from both  SourceForge  or  GitHub . Alternatively you can fork away in the  GitHub repo  - the master branch always contains the source of the latest release, while the develop branch has the latest development source and may not be stable.
Post a Comment
Read more

- July 01, 2022
Just released CodeSnip 4.20.1 which is a bug fix update to CodeSnip 4.20.0. It fixes a problem in the library that detects operating system version information and makes a few minor documentation changes. There are no changes to functionality. Because of the bug fix, I do suggest updating. As usual you can download the program from  GitHub  or from SourceForge: Download Standard Edition   Download Portable Edition Source is available to download from both  SourceForge  or  GitHub . Alternatively you can fork away in the  GitHub repo  - the master branch always contains the source of the latest release, while the develop branch has the latest development source and may not be stable.
Post a Comment
Read more

- May 16, 2022
I've managed to work around the problem I had yesterday when my antivirus program prevented me from uploading files to CodeSnip's releases page on GitHub. So, the executable files are now available to download from the Assets section. And how don't need to toddle over to SourceForge to get them! Here's the revised release page . I've updated yesterday's blog post too.
Post a Comment
Read more 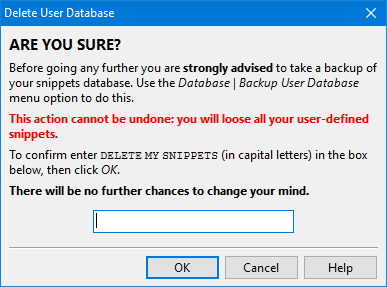 Here's the first CodeSnip update of 2022! First, there's an option to delete your user database if you really want to. Why would you do this? Well there's one possible reason and that's explained in this FAQ . The second main change is that now the size of font in the detail pane can be customised from the Display section of the Preferences dialogue box. This setting applies to all text in the pane with the exception of the source code. The size of the source code can be changed from the Syntax Highlighter section of the same dialogue box. While we're taking about the user database, I also fixed a bug that let you try to backup or move a non-existent user database, which wasn't pretty. There are a few other minor tweaks that you can read about in the  change log . As usual you can download the program from GitHub or from SourceForge: Download Standard Edition   Download Portable Edition Source is available to download from both SourceForge or GitHub . Alternat
Post a Comment
Read more

No update to CodeSnip needed for Delphi 11.1 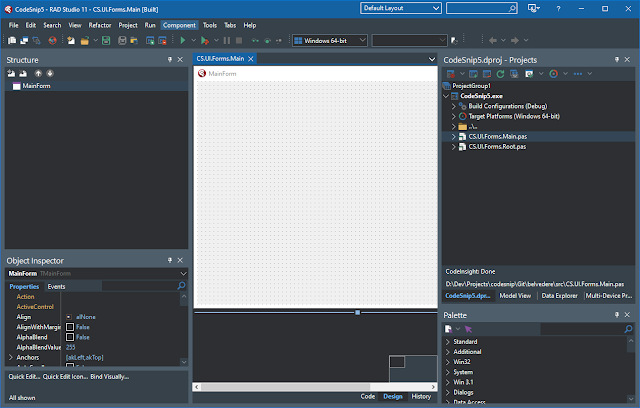 As I've blogged about elsewhere  the latest version of Delphi, 11.1 Alexandria has been released. Normally a new Delphi release is followed by a new release of CodeSnip that adds support for test compiling code with the new Delphi. But not this time. Delphi 11.1 is actually an update to Delphi 11.0. You have to update from one to the other - they can't be installed side by side. Also the registry information CodeSnip uses to differentiate Delphi versions has not changed from Delphi 11.0 to 11.1. So there's no way to distinguish between the two. Indeed the RAD Studio's IDE still declares RAD Studio 11 : RAD Studio 11.1 IDE What I am thinking of doing is to alter the way I describe Delphi 11 Alexandria inside to CodeSnip to read Delphi 11.x . Should be straightforward. (Really wish I'd no said that!!)
Post a Comment
Read more
More posts